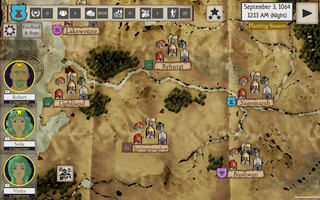 The last time I made a stink about a release was a little over 6 months ago and, frankly, the game was admittedly horrible. Actually, it was unplayable. But it existed.

This fact was very important (to me!) because I had just rebooted the project after learning some hard lessons. Getting back to something that was at least recognizably a game was important for my self confidence. Since that release the idea of Fealty has continued to form and crystalize. A lot of the progress is evident on the surface, but a lot of it is beneath the covers in the technology that powers the game.

Today I am happy and proud of releasing 0.1.4 to you. I think this version has started to capture what I am trying to do, and I hope that speaks to you.

I wrote many words already about all the things that went into this release if you are interested.

Let me know what you think!