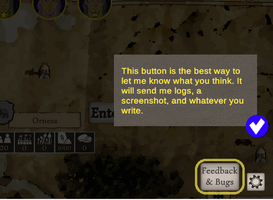 If you have been following along you know the game has been growing but the last two weeks have seen some real form start to emerge. Frankly, this release ended up being too big and I am not going to cover everything that has changed since 0.4.0 (aka 0.1.4) in November.

If you haven't played the game since December, you should definitely check it out and ...

You can get the latest dev build, or wait for the stable builds that are rolling out as I write. (It will be the same, just different packaging)

Enough yabber, here are the goods: